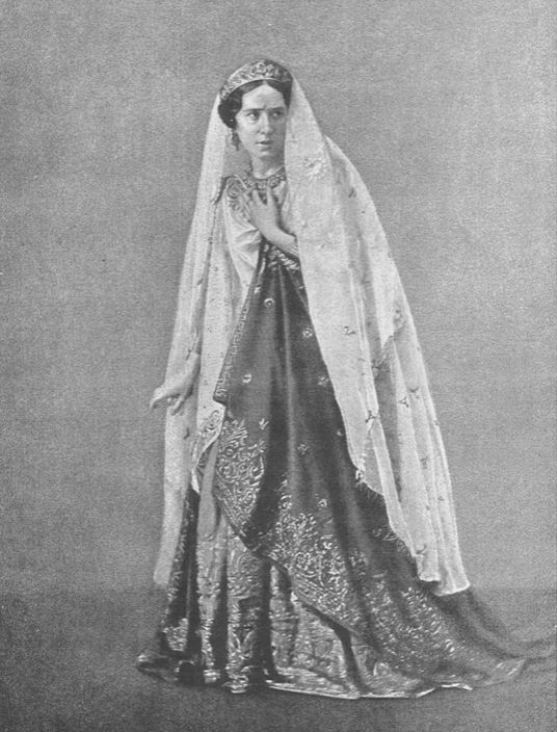 Rachel as Racine’s Phèdre, via Wikipedia

Text: To turn to something a little gayer, – the embroidery on this tattered coat of civilized life, – I went into only two theatres; one the Old Drury, once the scene of great glories, now of execrable music and more execrable acting. If anything can be invented more excruciating than an English opera, such as was the fashion at the time I was in London, I am sure no sin of mine deserves the punishment of bearing it.

At the Sadler’s Wells theatre I saw a play which I had much admired in reading it, but found still better in actual representation; indeed, it seems to me there can be no better acting play: this is “The Patrician’s Daughter,” by J.W. Marston. The movement is rapid, yet clear and free; the dialogue natural, dignified, and flowing; the characters marked with few, but distinct strokes. Where the tone of discourse rises with manly sentiment or passion, the audience applauded with bursts of generous feeling that gave me great pleasure, for this play is one that, in its scope and meaning, marks the new era in England; it is full of an experience which is inevitable to a man of talent there, and is harbinger of the day when the noblest commoner shall be the only noble possible in England.

But how different all this acting to what I find in France! Here the theatre is living; you see something really good, and good throughout. Not one touch of that stage strut and vulgar bombast of tone, which the English actor fancies indispensable to scenic illusion, is tolerated here. For the first time in my life I saw something represented in a style uniformly good, and should have found sufficient proof, if I had needed any, that all men will prefer what is good to what is bad, if only a fair opportunity for choice be allowed. When I came here, my first thought was to go and see Mademoiselle Rachel. I was sure that in her I should find a true genius, absolutely the diamond, and so it proved. I went to see her seven or eight times, always in parts that required great force of soul and purity of taste even to conceive them, and only once had reason to find fault with her. On one single occasion I saw her violate the harmony of the character to produce effect at a particular moment; but almost invariably I found her a true artist, worthy Greece, and worthy at many moments to have her conceptions immortalized in marble.

Her range even in high tragedy is limited. She can only express the darker passions, and grief in its most desolate aspects. Nature has not gifted her with those softer and more flowery attributes that lend to pathos its utmost tenderness. She does not melt to tears, or calm or elevate the heart by the presence of that tragic beauty that needs all the assaults of Fate to make it show its immortal sweetness. Her noblest aspect is when sometimes she expresses truth in some severe shape, and rises, simple and austere, above the mixed elements around her. On the dark side, she is very great in hatred and revenge. I admired her more in Phèdre than in any other part in which I saw her. The guilty love inspired by the hatred of a goddess was expressed in all its symptoms with a force and terrible naturalness that almost suffocated the beholder. After she had taken the poison, the exhaustion and paralysis of the system, the sad, cold, calm submission to Fate, were still more grand.

I had heard so much about the power of her eye in one fixed look, and the expression she could concentrate in a single word, that the utmost results could only satisfy my expectations. It is, indeed, something magnificent to see the dark cloud live out such sparks, each one fit to deal a separate death; but it was not that I admired most in her: it was the grandeur, truth, and depth of her conception of each part, and the sustained purity with which she represented it.

For the rest, I shall write somewhere a detailed critique upon the parts in which I saw her. It is she who has made me acquainted with the true way of viewing French tragedy. I had no idea of its powers and symmetry till now, and have received from the revelation high pleasure and a crowd of thoughts.

The French language from her lips is a divine dialect; it is stripped of its national and personal peculiarities, and becomes what any language must, moulded by such a genius, – the pure music of the heart and soul. I never could remember her tone in speaking any word; it was too perfect; you had received the thought quite direct. Yet, had I never heard her speak a word, my mind would be filled by her attitudes. Nothing more graceful can be conceived, nor could the genius of sculpture surpass her management of the antique drapery.

She has no beauty except in the intellectual severity of her outline, and bears marks of age which will grow stronger every year, and make her ugly before long. Still it will be a grandiose, gypsy, or rather Sibylline ugliness, well adapted to the expression of some tragic parts. Only it seems as if she could not live long; she expends force enough upon a part to furnish out a dozen common lives.

Though the French tragedy is well acted throughout, yet unhappily there is no male actor now with a spark of fire, and these men seem the meanest pigmies by the side of Rachel; — so on the scene, beside the tragedy intended by the author, you see also that common tragedy, a woman of genius who throws away her precious heart, lives and dies for one unworthy of her. In parts this effect is productive of too much pain. I saw Rachel one night with her brother and sister. The sister imitated her so closely that you could not help seeing she had a manner, and an imitable manner. Her brother was in the play her lover, —a wretched automaton, and presenting the most unhappy family likeness to herself. Since then I have hardly cared to go and see her. We could wish with geniuses, as with the Phoenix, to see only one of the family at a time.

Comments: Sarah Margaret Fuller Ossoli (1810-1850), commonly known as Margaret Fuller, was an American feminist and journalist, author of Woman in the Nineteenth Century. She travelled to Europe in 1846 for the New York Tribune, meeting in Italy her partner, the revolutionary Giovanni Angelo Ossoli. John Westland Marston was a British poet and dramatist. Rachel (Elisa Félix) (1820-1858) was one of the great stars of the Comédie-Française, known especially for her performances in classical roles, including Racine‘s Phèdre. her sister Lia Félix was an actress and presumably the sister referred to here. Her brother was Raphael Félix.