Illustration of Josephine Baker by Serge, reproduced in The Diaries of a Cosmopolitan

Dinner-party at home for Mme Mayrisch and her daughter, Hugo Lerchenfeld with wife, the Willy Radowitzs, Horstmanns, Lancken, Simolin, and Hannah Wangenheim.

At one o’clock, just as my guests were gone, a telephone call from Max Reinhardt. He was at Vollmoeller’s, and they wanted me to come over because Josephine Baker was there and the fun was starting. So I drove to Vollmoeller’s harem on the Pariser Platz. Reinhardt and Huldschinsky were surrounded by half a dozen naked girls, Miss Baker was also naked except for a pink muslin apron, and the little Landshoff girl (a niece of Sammy Fischer) was dressed up as a boy in a dinner-jacket. Miss Baker was dancing a solo with brilliant artistic mimicry and purity of style, like an ancient Egyptian or other archaic figure performing an intricate series of movements without ever losing the basic pattern. This is how their dancers must have danced for Solomon and Tutankhamen. Apparently she does this for hours on end, without tiring and continually inventing new figures like a child, a happy child, at play. She never even gets hot, her skin remains fresh, cool, dry. A bewitching creature, but almost quite unerotic. Watching her inspires as little sexual excitement as does the sight of a beautiful beast of prey. The naked girls lay or skipped about among the four or five men in dinner-jackets. The Landshoff girl, really looking like a dazzlingly handsome boy, jazzed with Miss Baker to gramophone tunes.

Volmoeller had in mind a ballet for her, a stay about a cocotte, and was proposing to finish it this very night and put it in Reinhardt’s hands. By this time Miss Baker and the Landshoff girl were lying in each others’ arms like a rosy pair of lovers, between us males who stood around. I said I would write a dumb show for them on the theme of the Song of Solomon, with Miss Baker as the Shulamite and the Landshoff girl as Solomon or the Shulamite’s young lover. Miss Baker would be dressed (or not dressed) on the lines of Oriental Antiquity while Solomon would be in a dinner-jacket, the whole thing an entirely arbitrary fantasy of ancient and modern set to music, half jazz and half Oriental, to be composed perhaps by Richard Strauss. Reinhardt was enchanted with the idea, as was Vollmoeller. We fixed on the twenty-fourth of this month for dinner at my apartment to discuss the matter, the two of them and the Landshoff girl, Miss Baker coming later. Vollmoeller asked me to invite Harden too. It was past four when I left.

Comments: Harry Kessler (1868-1937) was an Anglo-German aristocrat and diplomat. His diaries are an exceptionally vivid and observant account of art and politics in Weimar Germany. Josephine Baker (1906-1975, born Freda Josephine McDonald) was an African-American entertainer, renowned for her appearances in revue in Paris in the 1920s. Among the names included in this description of a private performance by Baker are the Austrian theatre producer Max Reinhardt, his playwright collaborator Karl Vollmöller, and the actress Ruth Landshoff (Vollmöller’s mistress), known for her appearance in Murnau’s film Nosferatu (1922). Nothing came of Kessler’s proposed dumbshow based on the Song of Solomon. 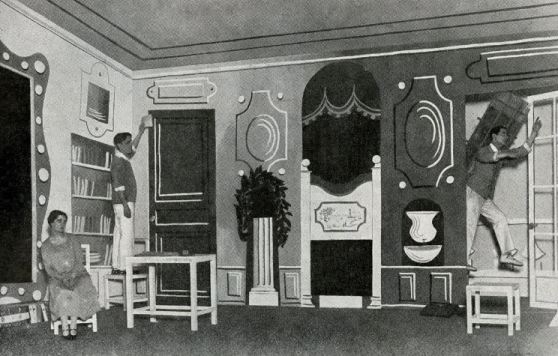 Text: First night of Cocteau’s Orphée, under Pitoeff’s direction, at the Théâtre des Arts. Tickets costs a hundred francs each (the same as for the Russian Ballet) and the audience was the usual smart and international et, including many Americans, British, and even Japanese. The play, which the Serts have long praised as a masterpiece, disappointed me. I thought it fumbling, neither true tragedy nor true comedy. Its focal point is an impossible, unintentionally funny figure of an angel (calculated appeal to the fashionably Catholic trend of taste). The part is played by a revoltingly mawkish, effeminate young man who appears to have escaped from some dreadful hairdresser’s. This sugary youth completely spoiled my taste for a production which was not improved by the fact of Mme Piteoff being once again far gone in pregnancy, a detail lending the part of Eurydice a touch of the grotesque. I was so ruffled that I quickly took myself off after the performance, greeting neither Cocteau nor the Serts.

Comments: Harry Kessler (1868-1937) was an Anglo-German aristocrat and diplomat. His diaries are an exceptionally vivid and observant account of art and politics in Weimar Germany. Jean Cocteau‘s Orphée had its debut at the Théâtre des Arts (now the Théâtre Hébertot) in Paris on 15 June 1926. It was directed by Georges Pitoëff (who also played Orphée). His wife Ludmilla played Eurydice. The ‘angel’ Heurtebise was played by Marcel Herrand. The Serts were the artist Josep Maria Sert and his pianist wife Misia. Most sources say that the play had its premiere on 17 June.

Text: Saw Noel Coward’s Vortex at the Comedy Theatre. He also plays the lead, a young drug addict. A very powerful piece. Coward’s performance is superb. With shattering realism yet masterly restraint, and no cheap tricks, he acts the tragedy on the son of a vain, pleasure-seeking, thoroughly depraved and heartless beautiful woman. The ending, though, is inconclusive because there is in fact no way out of the situation.

Comments: Harry Kessler (1868-1937) was an Anglo-German aristocrat and diplomat. His diaries are an exceptionally vivid and observant account of art and politics in Weimar Germany. Noël Coward‘s controversial play The Vortex originally opened at the Everyman on 25 November 1924, transferring later to the Royalty and then the Comedy.

Text: Saw Reinhardt’s production of Romeo and Juliet at the Berliner Theatre. An incredible muddle. So much intellect and so many bright ideas that the upshot is an inferior provincial performance. A Palladian setting, with Juliet’s bedroom in the courtyard between screens and the balcony scene acted backstage so that Romeo’s words are totally inaudible and Juliet’s nearly so. Dreadful. At one point, during Juliet’s duologue with the Nurse, the audience broke into loud laughter. Elisabeth Bergner and the Nurse, greatly upset, rushed offstage between the screens and an interminable pause followed, with the house lights left down, while presumably Juliet was being soothed by some manager or other in the wings. The production had an icy reception, except from an obvious claque. At the end the real members of the public, including those in the more expensive seats left without applauding. Young Franz Lederer and Elisabeth Bergner make a handsome pair (he bears a striking resemblance to Byron), but that is all the performance has to offer.

Comments: Harry Kessler (1868-1937) was an Anglo-German aristocrat and diplomat. His diaries are an exceptionally vivid and observant account of art and politics in Weimar Germany. Kessler saw Max Reinhardt‘s production of Romeo and Juliet starring Elisabeth Bergner and Franz Lederer, at the Berliner Theatre, Berlin, on 27 October 1928.

Alcestis being performed at Pompeii, Illustrated London News, 28 May 1927

Text: During the morning the usual tour of Pompeii, but in the afternoon, starting at half past four, we saw the first performance that has taken place for two thousand years in the ancient theatre: Euripides’ Alcestis, in Italian. A very fine and in parts (especially the first half) very harrowing production. The strangely obscure personality of Admetus perhaps defies (like that of Hamlet) the range of any actor. The play’s stupendous boldness of imagination and genius nevertheless remains as fresh as ever. There is a romantic, Shakespearian quality too in the structure of the work, with its compound of tragic and comic elements. And finally, as is the case with Shakespeare, the spectator is left with the feeling that the human soul is a riddle to which events, situations, and catastrophes occasionally supply clues without revealing its ultimate springs of inspiration.

Comments: Harry Kessler (1868-1937) was an Anglo-German aristocrat and diplomat. His diaries are an exceptionally vivid and observant account of art and politics in Weimar Germany. Euripides‘ fifth-century BC play Alcestis was performed in the Odeon theatre at Pompeii. The production was directed (and translated) by Ettore Romagnoli, with Letizia Celli playing Alcestis.

In the evening saw Othello at the Savoy Theatre, with Paul Robeson as Othello, Maurice Brown as Iago, Sybil Thorndike as Emilia, and a strikingly pretty and attractive young actress, Peggy Ashcroft, as Desdemona. Apart from her and Robeson, who was a dignified, passionate Othello, it is a moderately successful production. The casting of the smaller parts like Cassio, Rodrigo, Brabantio, and the Duke is comically inadequate and reminiscent of smaller German municipal theatres. The Weimar National Theatre is on the whole a better company and, seeing that it would have done quite well in comparison with this Othello performance, I am now less surprised that Brown should have thought of bringing it to London, His own rendering of Iago was presentable but average.

The Savoy Theatre has just been rebuilt and is regarded as the most modern in London. Nevertheless the revolving stage, or some other backstage machinery, creaked loudly during the most tragic scenes between Othello and Desdemona and Emilia and Desdemona, ruining the tension. The auditorium is modern is the less complimentary sense of the term, constructed in a style which in Germany we have nearly outgrown, all tinsel and meaningless ‘modern’ ornaments appropriate to a third-rate bar, the way that we built ten years ago. Theatre architecture in London and Paris is half a generation behind Berlin, Hamburg, Frankfurt and Stuttgart.

Comments: Harry Kessler (1868-1937) was an Anglo-German aristocrat and diplomat. His diaries are an exceptionally vivid and observant account of art and politics in Weimar Germany, and documents visits to many European cities. He saw the American black actor Paul Robeson in Othello at the Savoy Theatre, London, 24 May 1930.