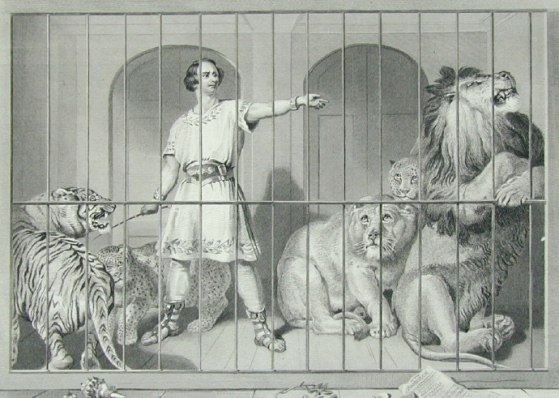 Text: At 10 I went with Lady Breadalbane (who came after dinner) and Miss Murray (in my carriage), Lehzen, Lord Conyngham, Lord Lilford, Lord Alfred, and Sir Robert Otway (in the others) to Drury Lane. We came in about 20 minutes before the Lions come on. Van Amburgh surpassed even himself, and was miraculous; he stayed a much longer time than usual in the 1st cage, and all the animals, were much more lively than usual, in the 2nd cage, as usual, the little lamb was brought in, while he was reclining on the lion’s body and head, and put before the Lion’s nose, which he, as usual, bore with indifference; when one of the Leopards, the smallest of all the animals, and a sneaking little thing, came, seized the lamb, and ran off with it; all the others, except the lion, and all those in the other cage making a rush to help in the slaughter, it was an awful moment, and we thought all was over, when Van Amburgh rushed to the Leopard, tore the lamb, unhurt, from the Leopard, which he beat severely,- took the lamb in his arms,- only looked at all the others, and not one moved, though in the act of devouring the lamb. It was beautiful and wonderful; and he was immensely applauded; he held the lamb for a few minutes in his arms; and then sent it out of the cage, but remained himself some little time in the cage, making these animals obey just as usual. After the Pantomime was over, we waited in a little ante-room till everybody was gone, and the house quite cleared, and then we all went down on the Stage, which was walled in by Scenery; and the cages with the animals again brought on; there they were, and most beautiful beasts they are, so sleek, so well-conditioned – and so wild – that really Van Amburgh’s power seems little short of a miracle. They had not been fed since early the preceding day, and consequently were wilder than usual; Van Amburgh, who was in plain clothes, is a tall, but not very powerful looking man; young, very modest, quiet and unassuming; with a mild expression, a receding forehead, and very peculiar eyes, which don’t exactly squint, but have a cast in them. I asked him if that had ever happened before with the lamb; he replied: “Sometimes it does; it did the first time I took one in”; but the lamb was unhurt; they then fed them, and they roared, and fought with one another terrifically; but it was very fine. I didn’t allow Van Amburgh to go into the cages, but he went up to them, and stroked them and they obeyed him wonderfully; he told Lord Conyngham that they were all full grown, but two, when he first had them; the large lion in the furthest cage is the fiercest, he says; and the weight of the leopard, which he carries on his head and shoulders, and makes perform every sort of beautiful trick, is 14 stone. He scarcely ever uses an iron bar to them, but only a stick made of Rhinoceros hide, which he showed us. We came home at ½ p.12 …

Comments: Alexandrina Victoria (1819-1901), later just Victoria, was Queen of the United Kingdom of Great Britain and Ireland from 1837 to her death, and additionally titled Empress of India from 1876. She kept up a journal from 1832 until almost the end of her life. The journal records many visits to the theatre, particularly in her younger days. She was particularly fond of the animal shows of the American trainer Isaac A. Van Amburgh (1811-1865), who was renowned for acts such as putting his head inside a lion’s jaws, but also notorious for the mistreatment of the animals in his menagerie. This occasion was the third occasions on which she had seen Van Amburgh’s act, which a regular part of the Drury Lane programme at this time.