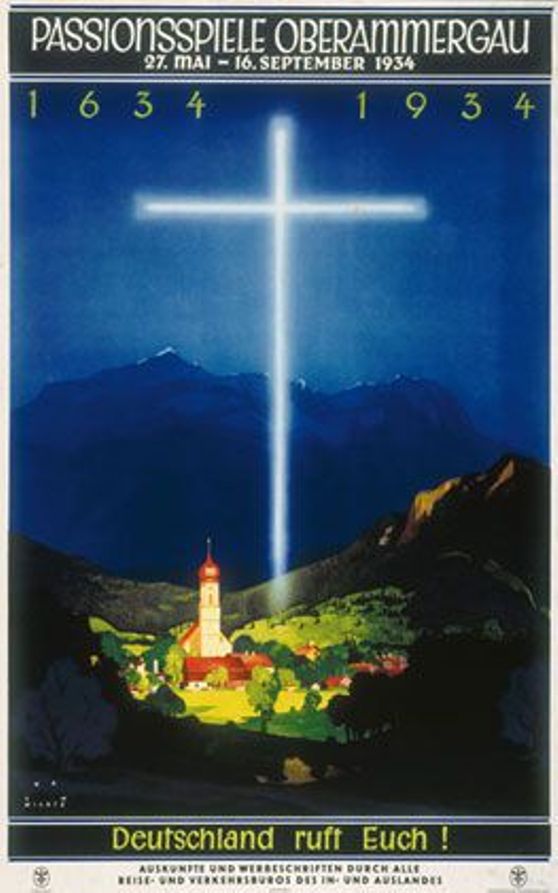 Poster for the 1934 Oberammergau Passion Play, via www.passionsspiele-oberammergau.de

Text: August 22, Wednesday. I went with my family to the famous Passion Play at Oberammergau, escorted by the mayor who had kindly sent us tickets. The mayor gave the Hitler greeting whenever he met any acquaintance on the street. We were all seated together in the reserved section but I think few if any of our neighbours knew who we were.

The play during the morning portrayed the early life of Jesus and the Old Testament prophecies and scenes showing what the Christian churches have always claimed were the connecting links between the Old and New Testaments. I saw no Jews present. There were 6,000 people in the beautiful hall. It is open at the end where the stage is located, and one gazes constantly upon a most beautiful mountain scene. It is a wonderful setting.

The chief actor is Lang, son of the man who gave the play its present form some thirty years ago. The Lang family are masters of the town, Oberammergau having normally 3,000 inhabitants whose main income each year is from visitors, foreign and German, who go there to see the Jesus tragedy. I think Lang is an excellent actor and the choir which sings or recites interludes in a grand style is impressive.

At 2 o’clock we took our places again in the great hall and the tragedy slowly moved to its culmination: the betrayal by Judas, the trail of Jesus and the awful scene of the executions on the cross, with law officers climbing short ladders to the crucified individuals and beating them before their deaths. When Jesus was tried before the angry Jewish court, a well-dressed German, looking very solemn, said to me: “Es ist unser Hitler.” Ida Horne, a distant kinswoman of mine, sitting in another part of the hall, told me as we came out together: “A woman near me said, as Judas received his thirty pieces of silver, ‘Es ist Roehm!’” I suspect half the audience, the German part, considers Hitler as Germany’s Messiah.

Comments: William Edward Dodd (1869-1940) was an American historian and diplomat. he served as US Ambassador to Germany 1933-1937. A passion play has been performed at Oberammergau in Bavaria, Germany, since 1634. The play is usually performed every ten years where the year ends in a nought, but a special 300th anniversary performance was put on for 1934. This had the support of the Nazi regime which had come to power the previous year. Ernst Röhm, or Roehm, leader of the Sturmabteilung paramilitary force, had been a close ally of Adolf Hitler but Hitler saw him as a threat and had him killed during the ‘Night of the Long Knives‘ the month before this performance. Hitler had seen the production on August 13. Anton Lang played the role of Prologue Speaker, having play the role of Christ in earlier productions.

Sunday evening’s performance was the last performance. They’ve played the dirty trick of putting Ionescu G. Maria back on for the last two days before the tour, yesterday and today. So now the impression is given that I’ve been taken down from the boards and replaced with an old play – as if it would have been such a disaster to keep me on for another couple of days! For a moment I was quite indignant. But then it passed. In the end, I don’t want to make a tragedy out of anything that’s happened to me at the theatre.

It’s been an adventure – and now it’s over. I didn’t gain a lot from it, nor did I lose much.

On Saturday evening, at the last performance but one, I watched the whole play for the first time since the Sunday immediately after the premiere. I’ve seen bits of each act at various times, depending on when I dropped by the theatre on my way back from the cinema or to see Leni. But I have only twice seen the play from beginning to end. I’m used to it by now, and it is almost impossible for me to judge it. The image of this production has almost completely covered the image I originally had of it. At first the differences between my conception and the stage performance were quite glaring. Little by little, however, the actors’ gestures (even if they were wrong) and their tones of voice (even if they were false) substituted themselves for what I had imagined at the time of writing. Sometimes I’d have liked to protest, to get them back on the right track, to restore my original text, to force them to act the play I actually wrote – but it would have meant too great an effort, and I wasn’t even sure it was worth it.

On Sunday evening I again watched the third act – for the last time! I was in the balcony, from where the stage appears far off and for that very reason somehow magical, and sometimes I shut my eyes to listen the words. Maybe it was the thought that this really was the last time, that none of these words would be spoken again, that they would remain in a typewritten file or, at best, in a printed book – maybe all these thoughts, with their sense of leave-taking, made me listen with emotion for the first time. I said to myself that something was dying, departing forever, breaking loose from me. Never again will I see the audience’s heads turned toward the stage, in the silence of an occupied auditorium, in the darkness broken only by the footlights, listening, taking in, echoing, answering the words written by me. Never again will I hear that laughter rise in warm animation toward the stage.

Next to me a girl was crying. She is the last girl who will cry for Jocul de-a vacanţa.

Comments: Mihail Sebastian (1907-1945) was the pen-name of the Jewish Romanian playwright and noveliest Iosif Hechter. Sebastian’s journal, not published until 1996 – when it gained huge acclaim – records the rise of Fascism in Romania through to the Second World War, the fall of the dictator Ion Antonescu’s fascist government on 23 August 1944, and Romania joining the Allies. Sebastian suffered from anti-Semitic persecution, but survived the war, only to die in a motor accident in May 1945. Jocul de-a vacanţa, or Holiday Games, was his first play. He was romantically involved with actress Leni Caler, who appeared in the production.

In the evening saw Othello at the Savoy Theatre, with Paul Robeson as Othello, Maurice Brown as Iago, Sybil Thorndike as Emilia, and a strikingly pretty and attractive young actress, Peggy Ashcroft, as Desdemona. Apart from her and Robeson, who was a dignified, passionate Othello, it is a moderately successful production. The casting of the smaller parts like Cassio, Rodrigo, Brabantio, and the Duke is comically inadequate and reminiscent of smaller German municipal theatres. The Weimar National Theatre is on the whole a better company and, seeing that it would have done quite well in comparison with this Othello performance, I am now less surprised that Brown should have thought of bringing it to London, His own rendering of Iago was presentable but average.

The Savoy Theatre has just been rebuilt and is regarded as the most modern in London. Nevertheless the revolving stage, or some other backstage machinery, creaked loudly during the most tragic scenes between Othello and Desdemona and Emilia and Desdemona, ruining the tension. The auditorium is modern is the less complimentary sense of the term, constructed in a style which in Germany we have nearly outgrown, all tinsel and meaningless ‘modern’ ornaments appropriate to a third-rate bar, the way that we built ten years ago. Theatre architecture in London and Paris is half a generation behind Berlin, Hamburg, Frankfurt and Stuttgart.

Comments: Harry Kessler (1868-1937) was an Anglo-German aristocrat and diplomat. His diaries are an exceptionally vivid and observant account of art and politics in Weimar Germany, and documents visits to many European cities. He saw the American black actor Paul Robeson in Othello at the Savoy Theatre, London, 24 May 1930.