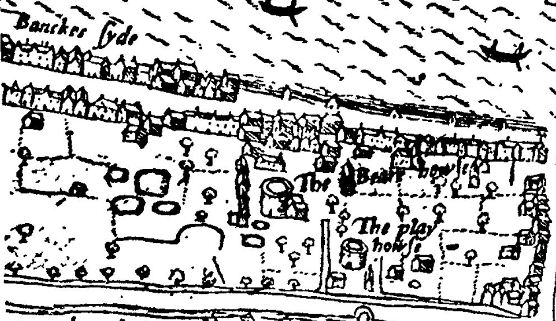 The Beargarden and the Rose Theatre, from Norden’s Map of London, 1593, via Wikipedia

Source: Lupold von Wedel, extract from travel account given in Lawrence Manley (ed.), London in the Age of Shakespeare: An Anthology ((university Park/London: Pennsylvania State University Press, 1986), p. 34, originally published in English as G. von Bülow (trans.), ‘Journey Through England and Scotland Made by Lupold von Wedel in the Years 1584 and 1585’, Transactions of the Royal Historical Society (London 1895)

Text: … The Thames is crossed by a bridge, leading to another town on the other side of the water called Sedorck [i.e. Southwark]. This bridge is built of stone, 470 paces long, but its upper part has not the appearance of a bridge, being entirely set ine houses filled with all kinds of wares, very nice to look at. …

On the 23rd we went across the bridge to the above-mentioned town. There is a round building three storeys high, in which are kept about a hundred large English dogs, with separate wooden kennels for each of them. These dogs were made to fight singly with three bears, the second bear being larger than the first, and the third larger than the second. After this a horse was brought in and chased by the dogs, and at last a bull, who defended himself bravely. The next was, that a number of men and women came forward from a separate compartment, dancing, conversing, and fighting with each other; also a man who threw some white bread among the crowd, that scrambled for it. Right over the middle of the place a rose was fixed, this rose being set on fire by a rocket: suddenly lots of apples and pears fell out of it down upon the people standing below. Whilst the people were scrambling for the apples, some rockets were made to fall down upon them out of the rose, which caused a great fright but amused the spectators. After this, rockets and other fireworks came flying out of all corners, and that was the end of the play. …

Comments: Lupold von Wedel (1554-1615?) was a German mercenary and travel writer. He travelled widely, visiting England and Scotland between August 1584 to May 1585. Wedel presumably visited the Beargarden, a theatre-like round structure on Bankside. The entertainment following the baiting starts as a dance of some kind, but thereafter becomes strange. 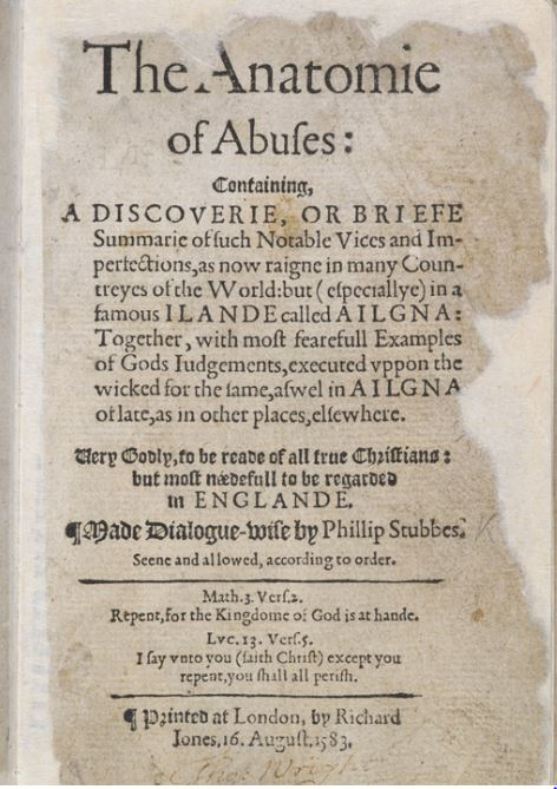 Text: Oh blasphemy intolerable! Are filthy plays and bawdy Interludes comparable to the word of God, the food of life, and life itself? It is all one, as if they had said, Bawdry, Heathenry, Paganry, Scurrility, and Devilry itself, is equal with the word of God; or that the Devil is equivalent with the Lord.

The Lord our God has ordained his blessed word, and made it the ordinary means of our Salvation; the Devil has inferred the other, as the ordinary means of our destruction; and will they yet compare the one with the other? If he be accursed that calls light darkness and darkness light, truth falsehood, and falsehood truth, sweet sour, and sour sweet, then, a fortiori, is he accursed that says that Plays and Interludes be equivalent with Sermons. Besides this, there is no mischief which these Plays maintain not. For do they not nourish idleness? and otia dant vitia, idleness is the Mother of vice. Do they not draw the people from hearing the word of God, from godly Lectures and Sermons? For you shall have them flock thither, thick and threefold, when the Church of God shall be bare and empty; And those that will never come at Sermons will flow thither apace. The reason is, for that the number of Christ his elect is but few, and the number of the reprobate is many; the way that leads to life is narrow, and few tread that path; the way that leads to death is broad, and many find it. This shows that they are not of God, who refuse to hear his word (for he that is of God hears God his word, says our Saviour Christ) but of the Devil, whose exercises they go to visit. Do they not maintain bawdry, insinuate foolery, and renew the remembrance of Heathen Idolatry? Do they not induce Whoredom and uncleanness? Nay, are they not rather plain devourers of maidenly virginity and chastity? For proof whereof, but mark the flocking and running to Theatres and Curtains, daily and hourly, night and day, time and tide, to see Plays and Interludes; where such wanton gestures, such bawdy speeches, such laughing and fleering, such kissing and bussing, such clipping and culling, such winking and glancing of wanton eyes, and the like, is used, as is wonderful to behold. Then, these goodly Pageants being done, every mate sorts to his mate, every one brings another homeward of their way very friendly, and in their secret conclaves (covertly) they play the Sodomites, or worse. And these be the fruits of Plays and Interludes for the most part. And whereas you say there are good Examples to be learned in them, truly so there are: if you will learn falsehood; if you will learn cozenage; if you will learn to deceive; if you will learn to play the hypocrite, to cog, lie, and falsify; if you will learn to jest, laugh, and fleer, to grin, to nod, and mow; if you will learn to play the vice, to swear, tear, and blaspheme, both Heaven and Earth: If you will learn to become a Bawd, unclean, and to devirginate Maids, to deflower honest Wives: If you will learn to murder, slay, kill, pick, steal, rob, and rove: If you will learn to rebel against Princes, to commit Treasons, to consume treasures, to practice Idleness, to sing and talk of bawdry, love and venery: If you will learn to deride, scoff, mock, and flout, to flatter and smooth: If you will learn to play the Whoremaster, the Glutton, Drunkard, or Incestuous person: If you will learn to become proud, haughty, and arrogant; and, finally, if you will learn to contemn God and all his laws, to care neither for heaven nor hell, and to commit all kind of sin and mischief, you need to go to no other school, for all these good examples may you see painted before your eyes in Interludes and Plays: wherefore that man who gives money for the maintenance of them must needs incur the damage of praemunire, that is, eternal damnation, except they repent. For the Apostle bids us beware, least we communicate with other men’s sins; and this their doing is not only to communicate with other men’s sins, and maintain evil to the destruction of themselves and many others, but also a maintaining of a great sort of idle lubbers, and buzzing Dronets, to suck up and devour the good honey, whereupon the poor bees should live.

Therefore, I beseech all players and founders of Plays and Interludes, in the bowels of Jesus Christ, as they tender the salvation of their souls, and others, to leave of that cursed kind of life, and give themselves to such honest exercises and Godly mysteries as God has commanded them in his word to get their livings withal; for who will call him a wise man, that plays the part of a fool and a vice? Who can call him a Christian, who plays the part of a devil, the sworn enemy of Christ? Who can call him a just man, that plays the part of a dissembling hypocrite? And, to be brief, who can call him a straight dealing man, who plays a Cozener’s trick? And so of all the rest. Away therefore with this so infamous an art! For go they never so brave, yet are they counted and taken but for beggars. And is it not true? Live they not upon begging of every one that comes? Are they not taken by the Laws of the Realm for rogues and vagabonds? I speak of such as travel the Countries with Plays and Interludes, making an occupation of it, and ought so to be punished, if they had their deserts. But hoping that they will be warned now at the last, I will say no more of them, beseeching them to consider what a fearful thing it is to fall into the hands of God, and to provoke his wrath and heavy displeasure against themselves and others; which the Lord of his mercy turn from us!

Comments: Philip Stubbes (c.1555-1610) was an English pamphleteer, best known for his 1583 pamphlet The Anatomie of Abuses. This attack on the manners and customs of the times has much information on attitudes towards the theatre, specifically the London theatres, of which The Theatre and The Curtain, two venues located close to one a other in north London, are referenced in his diatribe. It is unclear whether Stubbes ever actually visited a theatre. The spelling in the above transcription has been modernised slightly for ease of reading. It comes from a section of the pamphlet entitled ‘Of Stage-Playes and Enterludes, with their wickednesse’. Interludes were Tudor-era theatrical entertainments.