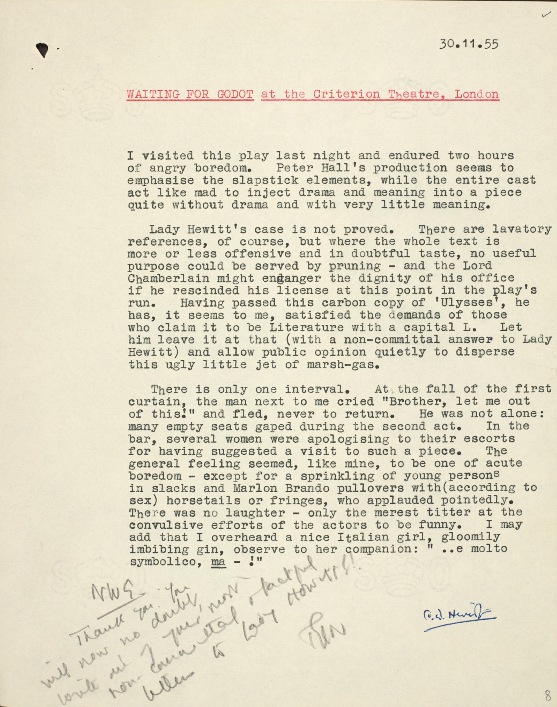 Text: I visited this play last night and endured two hours of angry boredom. Peter Hall’s production seems to emphasise the slapstick elements, while the entire cast act like mad to inject drama and meaning into a piece quite without drama and with very little meaning.

Lady Hewitt’s case is not proved. There are lavatory references, of course, but where the whole text is more or less offensive and in doubtful taste, no useful purpose could be served by pruning – and the Lord Chamberlain might endanger the dignity of his office if he rescinded his license at this point in the play’s run. Having passed this carbon copy of ‘Ulysses’, he has, it seems to me, satisfied the demands of those who claim it to be Literature with a capital L. Let him leave it at that (with a non-committal answer to Lady Hewitt) and allow public opinion to disperse this ugly little jet of marsh-gas.

There is only one interval. At the fall of the first curtain, the man next to me cried “Brother, let me out of this!” and fled, never to return. He was not alone: many empty seats gaped during the second act. In the bar, several women were apologising to their escorts for having suggested a visit to such a piece. The general feeling seemed, like mine, to be one of acute boredom – except for a sprinkling of young persons in slacks and Marlon Brando pullovers with (according to sex) horsetails or fringes, who applauded pointedly. There was no laughter – only the merest titter at the convulsive efforts of the actors to be funny. I may add that I overheard a nice Italian girl, gloomily imbibing gin, observe to her companion: “… e molto symbolico, ma – !”

Comments: C.W. Heriot was an Examiner for the Lord Chamberlain’s Office, which served as official as official censor for all public performances in Britain until 1968. The Office had issued a licence to the production of Samuel Beckett‘s play Waiting for Godot, but was responding to a letter of complaint from Lady Dorothy Howitt. The mention of Ulysses is because an earlier note in the correspondence refer to Beckett having been a secretary to James Joyce. Peter Hall‘s production of Beckett’s play had opened at the Arts Theatre, London, in August 1955, but the correspondence refers to its subsequent staging at the Criterion Theatre, London. Peter Woodthorpe played Estragon but various actors played Vladimir during the run. Peter Bull played Pozzo.

This site uses Akismet to reduce spam. Learn how your comment data is processed.